The first week in September saw the Environment Agency publish the Q2 WEEE collection figures, showing a decrease of nearly 1,800 tonnes from Q1 of this year.

With the 2019 target pushing above 550,500 tonnes (a significant increase of 13,463 tonnes from the 2018 target), it’s looking increasingly likely that the UK will miss the recycling target for third year in a row.

With the data in for the first half of the year, the UK is currently at 45% of the annual target for collected WEEE across all categories. If the current position was extrapolated out to the end of the year, the industry is looking at the very least like a 10% shortfall. The likelihood of some compliance schemes having to rely on the compliance fee is creeping from possibility to almost certainty.

As discussed in our last article analysing the 2019 Q1 figures, 2018 saw a shortfall of ~45,000 tonnes (almost 25%) against a lower target than this year, so things are improving year on year, but not at the speed necessary to achieve the Government targets. 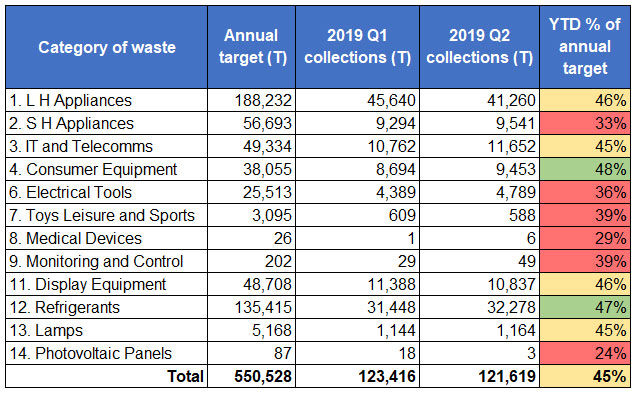 The second column in the above table shows the ‘Annual Target (T)’ per category, the number of tonnes required to be collected for UK producers to hit the target. The third and fourth columns show the tonnages collected for Q1 and Q2, with the fifth column showing the Year To Date % collected against the end of year target.

The front running categories from Q1 continue to perform reasonably with Cat 1 (Large Household Appliances), Cat 3 (IT and Telecomms) and Cat 4 (Consumer equipment) within 5% of their target. Cat 2 (Small Household Appliances) poses possibly the biggest challenge, with only 33% collected at this point in the year, which begs the question, is the impact of the compliance fee having the desired affect that it’s set out to do, to increase infrastructure and collection networks?

Head of policy Robbie Staniforth commented “We’ve known for many years now that WEEE collections are not increasing quickly enough. The industry needs to look beyond the old model of asking citizens to ‘take it to the tip’ and start creating a much larger network of take-back locations."

"It is encouraging to see the Environmental Audit Committee publish the submissions they received as part of their WEEE inquiry. The feedback suggested that many changes are required to really get the system working for manufacturers, retailers, local authorities, treatments facilities and, most importantly, citizens.”

This month Ecosurety is trialling an initiative to improve WEEE collections from both businesses and households as part of Recycle Week. Watch this space to find out more! 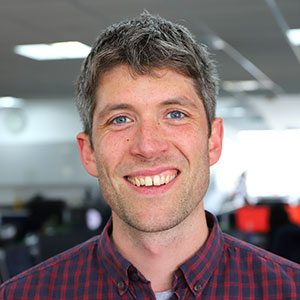 As Lead product manager, Kester leads the design and delivery of new customer services that help producers navigate the complexities of new legislation through data and insight.