2020 WEEE collections fell short of the overall target by 8%, meaning the target has been missed for four consecutive years.

The 2020 total WEEE collections for the last quarter of the year were published last week by the Environment Agency. As demonstrated by the table below, collections fell short of the overall target by 8%. The total 459,737 tonnes that were collected constitute 29.5% of the total placed on market figures.

The data shows that the total tonnage collected by producer compliances schemes last year was 37,000 tonnes less than in 2019, undoubtedly due to COVID-19 restrictions. There were only three categories in which the target was exceeded – large household appliances, photovoltaic panel and medical devices. 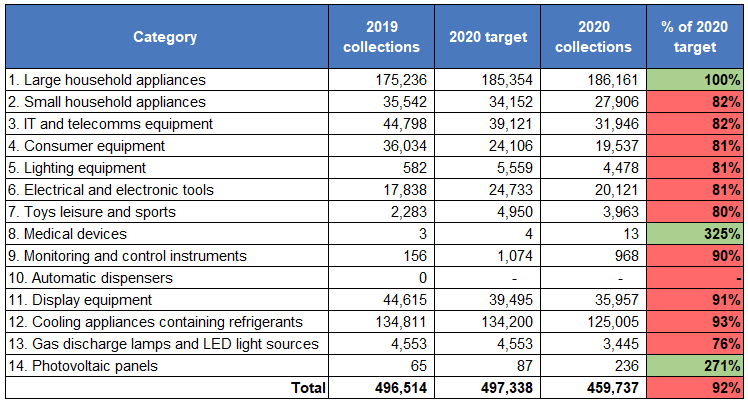 Reliance on the compliance fee

Failing to meet the overall target means many producer compliance schemes will have to pay the compliance fee, in order to meet their obligation. Defra announced in February that the JTA’s methodology had been chosen for the 2021 compliance fee, and the calculation has been adapted to allow for the impact of COVID-19.

Although there were increased collections in Q3 of last year, the data shows they were insufficient to make up for the national lockdowns earlier in the year and the further restrictions before Christmas meant the target was unlikely to be hit.

Phil Conran, chair of the AATF Forum which is an organisation representing 85% WEEE treatment stakeholders, has stated “2020 saw a 10% jump in EEE placed on the market and whilst recognising the likely difficulties that will persist with HWRC collection volumes for some of this year, we believe there are significant amounts of WEEE that householders have been holding onto until HWRCs are fully open. We therefore expect a surge in volumes later in the year and believe it is right to maintain the pressure on collections”.

Robbie Staniforth, Head of innovation and policy at Ecosurety, commented "The figures accurately reflect the difficulties experienced as a consequence of lockdown. Unfortunately, due to the way the system is designed, the targets set by Government on an annual basis do not set a trajectory for improving outcomes for electrical items."

"It is being inferred that people are hoarding waste at home, rather than alternatives, like making items last longer or passing down to other family members. This highlights just how poor the data is. The annual cycle of setting and missing targets needs to be broken by significant improvements to the legislation. We look forward to consultations that will address these issues and many more later this year."

Find out more about future legislative changes to WEEE EPR, including upcoming consultations.