The Q2 WEEE collection figures for 2022 reveal that the UK is, once again, unlikely to achieve the annual target.

Compliance schemes have reported a total of 236,036 tonnes of WEEE collected from households in the first two quarters of 2022, representing a 46% progression toward the annual target.

Similar data from 2021 shows that the UK had achieved a 47.5% recycling rate yet was still short of the target at year-end, which demonstrates an unlikeliness for collections to increase enough in the last half of 2022 to achieve compliance.

There are several reasons why the target may not be reached this year, not least the adjustments still being made due to the reduced WEEE volumes seen in the pandemic. It is also thought that the impending cost of living crisis will reduce public consumption of electrical goods, and potentially the amount of waste electricals available for collection in the latter half of this year.

The second quarter of this year saw a small rise of around 269 tonnes in the amount of small household appliances being delivered to designated collection facilities (DCFs). This could be due to the relatively new rules that require larger electrical retailers to offer mandatory takeback. By contrast, the amount of large household appliances collected was reduced by 6,395 tonnes from the first three months of the year. 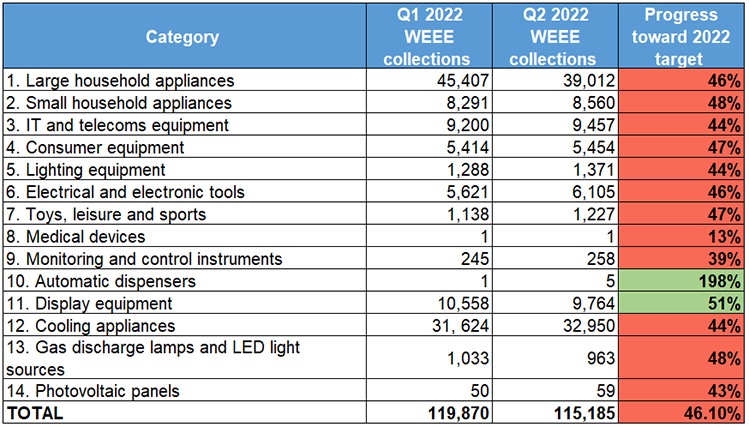 The overall annual target for 2022 increased by 4% from the previous year to a total of 511,377 tonnes. Although unlikely to be reached in 2022, we expect increased collections of household electrical waste will be a top priority in the upcoming WEEE review, due to be released later in the year. We know key topics will cover the potential for kerbside collections and take-back obligations for online marketplaces.

For more information on what these figures mean for you, please contact our team.