The WEEE collection figures released earlier this month give a strong indication that the current economic climate, including the impact of the cost-of-living crisis, is having a significant influence on the latest results.

Overall, there has been a 69% progression towards the annual collection target of 503,629 tonnes – but this is sadly short of the 75% position we’d like to be achieving by Q3.

There was a 2% uplift in collections in Q3 when compared to Q2, with a total of 118,268 tonnes of waste electricals collected from households in the quarter. This is slow progress towards the annual target however, particularly when we can expect Q4 to be a much quieter period for collections due to the Christmas break.

Only two categories – Category 10 (Automatic dispensers) and Category 11 (Display equipment) – have achieved more than 75% of their target. Meanwhile, only 67% of the target has been reached within Category 1 (Large household appliances) and Category 5 (Lighting equipment). This is much lower than what we would expect at this time of the year, suggesting the UK will miss the annual target for the sixth year running. 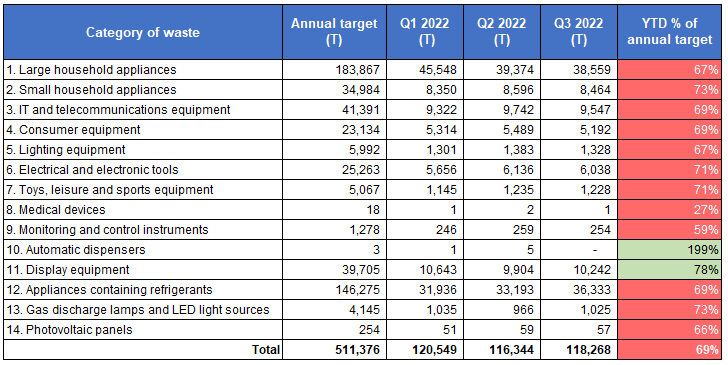 Decreases in consumer spending are being felt

One of the most prominent effects of the current cost-of-living crisis is the subsequent consumer inability or reluctance to spend unnecessarily. Reduced disposable income will have consequences for most industries, and signs are already visible in the WEEE market.

For instance, placed on market figures for household EEE materially declined this year, meaning decreases in consumer spending. With a recession and further inflation, we can expect EEE sales to keep decreasing with a subsequent impact on evidence prices. This is particularly true for WEEE product streams with shorter lifetimes, where placed on market tonnages tend to directly correlate with evidence availability.

Policy advisor, Louisa Goodfellow, commented "It seems inevitable that the UK will miss its WEEE collection targets and the compliance fee used, for the sixth year."

"Although it’s hard to pinpoint exactly why under 70% of the target has been achieved by Q3 it’s likely partly due to current inflationary pressures and energy prices affecting transport and treatment costs. Furthermore, the increased cost-of-living on consumers can already be seen in this year’s lowered placed on market figures, so it makes sense that the availability and collection of goods such as large household appliances has followed suit."

We expect the Q4 figures to be released in March next year and it seems unlikely that Defra will raise the annual targets due to the struggle of cost-of-living and consumers purchasing less.

If you have any questions about the collection targets, please do not hesitate to contact our team.