Creating a wave of change in a plastic ocean

The new documentary film ‘A Plastic Ocean’ opens up the world of plastic pollution for all to see, exposing the consequences of our global disposable lifestyle.

A few days ago my colleague Abbey Fortescue and I attended a viewing of ‘A Plastic Ocean’ organised by the Avon Wildlife Trust for the excellent Keynsham Festival of Nature.

Despite both of us working for a waste compliance scheme, being avid scuba divers and having studied scientific degrees in Medicinal & Biological Chemistry and Applied Marine Sport Science, we were shocked by what we heard and saw in this new feature-length documentary. Described by Sir David Attenborough as “The most important film of our time”, you can watch the trailer below.

Producer Jo Ruxton’s inspiration for the film came from an expedition to the Great Pacific Garbage Patch in the North Pacific Gyre in order to determine its impact. A gyre is a ring-like system of ocean currents – there are five that interconnect across our oceans: 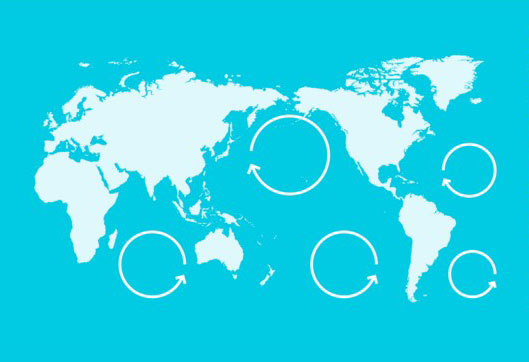 Rather than finding a containable solid structure of rubbish, they discovered a huge mass of free floating microplastics (<5mm). This is when Jo started connecting with various experts to create A Plastic Ocean. She wanted to prove that if there is plastic in one gyre, it must be in all of them, resulting in a truly global plastic problem.

This film explores not only the direct negative impact of plastic on marine animals but also the knock-on effect on the fishing trade and human health due to the resulting toxins in the seafood and water that we consume.

There is also the direct health implications of using plastic before it is even disposed of or recycled due to the endocrinal disruptors we consume from using plastic bottles, straws and pacifiers, to name but a few. It is believed these can contribute to the cause of cancerous tumours, birth defects and other developmental disorders. The film also considered the human communities forced to live on plastic wastelands and the pulmonary health implications of burning plastic.

The film highlights some headline statistics that really hit home on the scale of the problem of plastics in the oceans, here are just a few:

More than 8 million tons of plastic is dumped in our oceans every year
And we produce 300 million tonnes every year – that’s the equivalent weight of all the adults on the planet.

Over 97% of Laysan Albatross chicks have plastic pieces in their stomachs
The record is 276 pieces of plastic found inside a 90 day old chick. That’s 15% of its body mass.

It takes 6 litres of water and ¼ litre of oil to make a 1 litre plastic bottle
By the time it reaches a consumer, plastic bottled water costs 1,000 times more than tap water.

The ratio of plastic to plankton in the Mediterranean Sea is 1:2
On a bigger scale, one in three species of marine mammals have been found entangled in marine litter.

On a positive note…

Whilst these facts are deeply troubling, not everything featured in the documentary was negative. The cinematography was astounding, showcasing the beauty of both our oceans and their marine life. The efforts of the various communities and scientific experts who are working hard to provide cleaner environments and evidence for policy change, or new technologies, was also truly inspiring.

The successful plastic bottle recycling initiative used in Germany was also featured. Plastic bottle pollution is barely seen in Germany due to their deposit-refund system (DRS) where consumers can earn money by returning their plastic bottles to the supermarkets via machines. The machines scan the barcode to determine the types of plastic for sorting. The introduction of this scheme has seen 98.5% of refillable bottles being returned by consumers which is the highest in the world!

Closer to home, Bristol’s very own life-size whale sculptures were featured in the documentary. The whales, made from willow, and the plastic bottle waves from which they emerge, were created as part of an educational campaign to raise awareness of the oceanic challenge that faces us.

What can you do to help?

Plastic Oceans is a global network of independent not-for-profits and charitable organisations – one of which is in the UK.

The network has a united goal of changing the world’s attitude towards plastic. Together they use the ocean to monitor the impact of, as they put it, the “man-made pollution crisis” on human, marine and environmental health with the aim of limiting the demand for non-essential plastic.

The initial awareness campaign of A Plastic Ocean will continue to spread so as to engage people of all ages and social backgrounds. A better understanding of the threat to human health, and the danger of continuing to identify plastic as disposable, will hopefully result in a personal choice to prevent plastic waste from entering the environment.

Here are five ideas of how you can get involved:

You can find out more about the film by visiting www.plasticoceans.org/film.

Kimberley works closely with our members in her role as an account manager, working hard to ensure they have everything in order to comply with their obligations. Having graduated from the University of Exeter with a Bachelor of Science in Biological and Medicinal Chemistry, Kimberley is without a doubt highly experienced dealing with technical intricacies and processes!

Can we get a grip on tyre EPR?


The government have committed to publicly consult on introducing two new extended producer responsibility (EPR) regimes by the end of 2022.

Read More >>
The future of textiles EPR - the start of shoddy recycling policy?


Last year textiles were identified as a priority for future EPR, here we look at the wider issues and how it could be implemented.