Innovative #LeedsByExample campaign is set to pilot new ways of improving recycling rates outside the home, across an entire city

Ecosurety has again joined forces with the environmental behaviour change charity Hubbub to bring together a unique coalition of industry giants and a local authority, in an innovative bid to improve the recycling of food and drink packaging disposed of on-the-go.

A lack of effective recycling facilities for consumers outside of their homes is a national problem, one that is poorly catered for on the streets of cities across the UK.

The #LeedsByExample campaign will see a combination of ground-breaking technology, new recycling facilities and engaging communications activities piloted in Leeds City Centre in conjunction with Leeds City Council, from September 2018 for six months.

Importantly the results of the trial will be shared openly with the goal of rolling-out the most successful elements on a national level, enabling the successes to be duplicated in any major city or town in the future.

#LeedsByExample will see new recycling facilities strategically introduced in a number of key areas including on the streets, in local offices, shopping centres, universities and transport hubs. Subsidised recycling bins and communication support will also be offered to local businesses. Leeds City Centre is a major destination for business and leisure, it also has a growing residential population and the average weekly footfall of 1.3 million provides a great opportunity to trial this innovative approach to recycling. 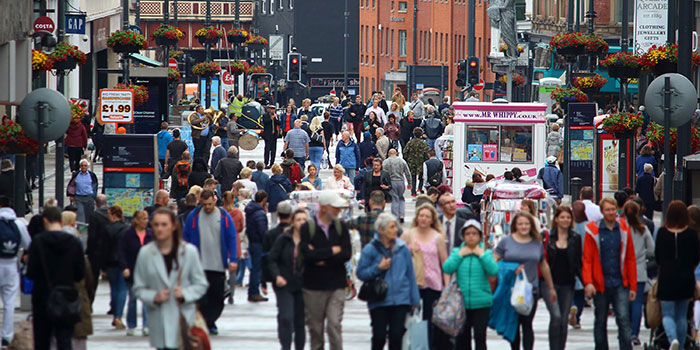 A key element of the initiative will also be the first UK trial of an app developed by OPRL (On-Pack Recycling Label), which will use on-pack barcodes to help people understand what and how to recycle, with a map to find their nearest recycling points. The new app is just one of a range of approaches designed to engage the youthful population of Leeds, an important consideration with 57% of the population of the city centre are aged 16 to 24.

In this way the campaign addresses a growing challenge with recent surveys highlighting that 18 to 25 year olds are twice as likely as older generations to buy food on-the-go, yet millennials are less likely to recycle. The £17.4bn a year food-to-go industry is expected to increase to over £23bn by 2022, yet recent research by ReCoup found that only 42% of local authorities provide on-the-go recycling facilities.

An important role to play for local businesses

Gavin Ellis, Director and Co-Founder of Hubbub commented “We know that the public want to do the right thing and recycle as much as they can, but are often confused as to how to do this or simply don’t have access to the recycling facilities they need while they’re out and about. It’s fantastic to have the backing of this broad group of businesses to help make this possible."

"There is also an important role to play for local businesses. We’ll be providing subsidised recycling bins, communications support and advice and would love to hear from any Leeds businesses interested in getting involved.”

Cllr Rafique, Leeds City Council executive board member for environment and active lifestyles said “Improving recycling rates and changing behaviours to get people to think about what they are doing with their recyclable waste in Leeds is really important, and we are pleased to be part of this new and exciting trial."

"Leeds City Centre provides a great opportunity for us to test innovative technology and campaigns to get our population recycling on the go – be that in the office or out and about. I would encourage any of our local businesses interested in getting involved to get in touch with Hubbub to see how you can be part of this exciting project.“

Inspire other parts of the UK

James Piper, Managing Director of Ecosurety commented that “Whilst recycling on-the-go can seem a complex issue to tackle, we believe that simple infrastructure improvements and clear communication could make a huge difference to recycling rates and to litter. We hope that by demonstrating there are alternative ways of collecting and dealing with recycling, we can inspire other parts of the UK to follow suit.”

The #LeedsByExample project follows on from the successful #BringBackHeavyMetal national battery recycling awareness campaign launched by Ecosurety and Hubbub in October 2017.

For further information on the initiative and to get involved, please visit www.hubbub.org.uk/join-leeds-by-example-collaboration

Leeds is the UK’s third largest city, with an economy worth £21.3 billion and is forecast to grow by 21% over the next decade.  It has the largest centre outside London for financial and business services, digital, creative, publishing and broadcasting and is ranked third in UK for its retail offering.  There are 774,060 people living in Leeds.  It has four universities and 200,000 students.  Leeds has the busiest train station in the North of England catering for over 100,000 passengers a day.

With more than 1,000 customers including Morrisons, The Co-operative Group and Virgin Media, Ecosurety supports efficient and more transparent investment in UK recycling projects via infrastructure, innovation and consumer awareness campaigns.

Committed to reducing the environmental impact of UK businesses, and to a tangible increase in UK recycling, Ecosurety helps producers organise quality evidence to ensure they comply with packaging, WEEE, batteries and international regulations.