The Q2 unverified recycling figures released by the Environment Agency indicate that recycling targets for all materials are currently on track.

The unverified figures released by the Environment Agency last week confirm a continuation of the positive packaging recycling performance seen in Q1 this year.

The table below shows estimated gross requirements for 2021 and also the carry-in tonnage reported earlier in the year. Carry-in is the amount of PRNs produced in December 2020 that are issued for 2021 use. The data shows that the total amount of carry over PRNs has increased in comparison to the previous year, most significantly in plastic.

You will see from the table below that all materials are performing well against the recycling targets, showing a surplus in all materials. 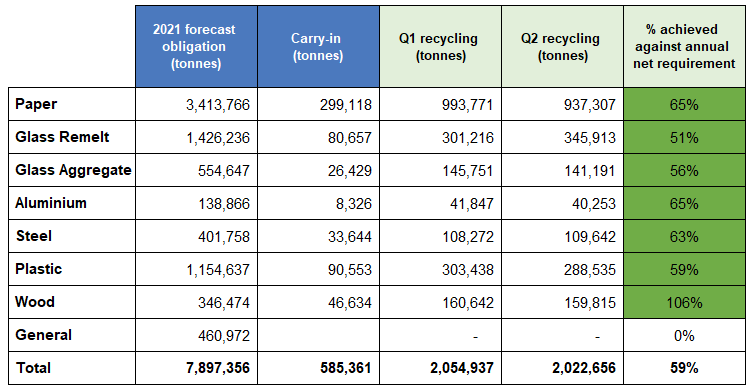 What does the data mean for producers?

Glass remelt recycling has had a slow start to the year, with volumes significantly down in Q1 compared to the previous year. Recycling volumes have increased in Q2 which has taken a bit of heat out the market for the first half of the year.

Glass remelt will remain medium risk until the release of the Q3 data which is expected on 22 October. Glass aggregate has been performing well against the target all year, there is little risk of volumes diminishing in the second half of the year.

Plastic has performed extremely well against its recycling target despite the uncertainty of Basel and Brexit export rules. Plastic exports also faced some challenges with Turkey imposing an import ban in May, which has resulted in a reduction in supply in Q2. Whilst the data remains unverified, the Q2 data remains positive and will result in the market price softening over the coming weeks.

The main risk for the remainder of the year is around how many accreditations the Environment Agency may cancel and how many PRNs/PERNs will be asked to be paid back due to recyclers mis-claiming them. There is a view that less risky evidence will be sold at a premium, which will create a pricing differential in the second half of the year.

Paper recycling has remained solid during the first half of the year. Q2 data shows a slight slowdown during the last quarter, however the market is oversupplied with recycling evidence and prices will continue to fall.

There is a slight risk that should prices fall too low recyclers will choose not to issue evidence and the market could face some tightening in the second half of the year.

Another positive quarter for aluminium recycling, the data suggests that there are approximately 15,000 tonnes of excess PRNs in the system by the end of June. This will result in prices softening over the coming weeks and there is very little risk that recycling volumes in the second half of the year will lead to a shortage of evidence.

Wood has provisionally met its recycling data based on the release of the Q2 data. The reduction in the overall wood recycling target has meant that the market had forecasted an oversupply of recycling evidence this year and prices will continue to fall.

Similarly to paper, should prices fall too low there is a risk that recyclers will no longer choose to issue evidence, although there will be no risk to the wood recycling target.

Ecosurety will continue to communicate the changes in the PRN market throughout the year. As supply is looking strong for the first half of the year, the main risk across all materials, particularly plastic, is how many recyclers will have their accreditations cancelled in the second half of the year and what impact that will have to supply.

Ecosurety packaging members can access the PRN market tracker that provides a daily update on market pricing trends and performance by clicking here.

If you would like to speak to a member of the Ecosurety team about the impact of compliance on your business, please contact us on 0333 4330 370.

Find out more about how Ecosurety works hard to make a positive impact on UK recycling. 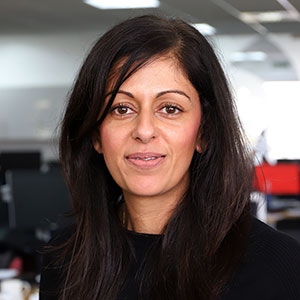 Sandeep works in the role of Group procurement manager. Sandeep builds and maintains strategic relationships with our key service partners for packaging, batteries and WEEE, whilst creating new relationships and initiatives to improve UK recycling. Sandeep has over 17 years’ experience of the regulations and understands the challenges and opportunities that can arise from volatile markets.