Only two categories, Small Household Appliances and Photovoltaic Panels, exceeded their individual targets. Across all other categories a shortfall was reported, collectively totalling 44,532 tonnes.

With the collection target set at 45% of placed on market EEE, the figures indicate that the UK only collected 38.67%, compared to the actual EEE placed on the market in 2018. Despite missing the target for a second year running with an overall shortfall of 44,532 tonnes, 2018 has performed better than 2017 which saw a shortfall of nearly 100,000 tonnes. 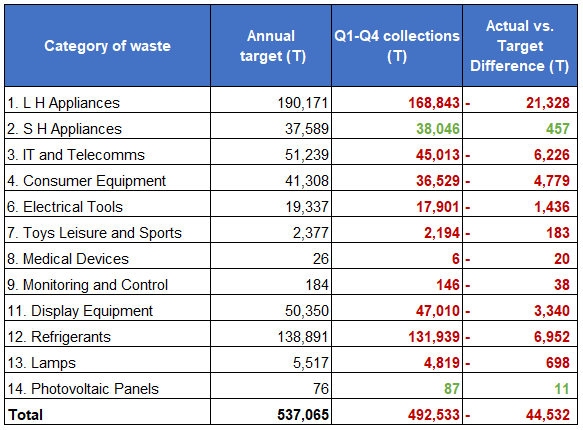 Reliance on the compliance fee

The category with the biggest tonnage shortfall also had the largest target, Large Household Appliances, missing the target by 11% or 21,328 tonnes. Other significant shortfalls include the categories of IT and Telecomms, Consumer Equipment, Display Equipment and Refrigerants.

The shortfalls indicate that many schemes will be reliant on the WEEE compliance fee to ensure they meet their obligations, an alternative way for schemes to comply that feeds into a multi-million pound fund designed to help the UK meet its targets. Recently it was announced that the compliance fee fund will be used for research into routes to waste for EEE, to address concerns of the widening gap between placed on market EEE and collected WEEE.

Sue Nolan, procurement manager at Ecosurety, commented that “The Q4 WEEE figures published today immediately suggest that a number of compliance schemes will be obliged to refer to the WEEE compliance fee option to balance their books. It also indicates that DEFRA has failed to consider the recycling capacity of the UK’s WEEE market and some urgent revisions to the existing system are required.

Ecosurety urges DEFRA to ensure the money raised through the WEEE compliance fee is invested into an effective programme that seeks to improve both the collection and reprocessing of EEE but also considers ways that businesses can be better incentivised to source recycling evidence for their electrical products.

With regards to the proposed increased WEEE targets for 2019 announced this week, it is good to see Defra continuing alignment with the EU by aiming to meet the 65% target. As we anticipated, they have put up targets particularly sharply for producers of tools, toys and miscellaneous small domestic products. It remains to be seen however whether this will actually stimulate additional collections and recycling.

Historically, when the government have set high targets, it has not led to more WEEE being collected. As much as we may “will it to be so”, higher targets don’t generate more recycling on their own. Therefore, the government is pinning hopes for more recycling on the £8 million Compliance Fee Fund, which is yet to be spent. We hope this will have a significant impact soon to lift collection rates.”

To find out more about how Ecosurety can help with your WEEE compliance obligations, please contact us.