A new campaign to tackle on-the-go recycling is launching in Leeds city centre today. Called #LeedsByExample, it is the UK’s biggest street-based recycling initiative to date.

It sees Ecosurety and behaviour change charity Hubbub join forces with industry, government and retailers to trial a range of innovative ways to improve rates of recycling on-the-go. From bubble blowing bins, recycling reward machines, a huge art installation to a ‘Re-Cycler’ collection bike, consumers will be met with a raft of creative and engaging ways to recycle food packaging plastic, cans and paper cups.

A unique element of the campaign will be a new We-Recycle app, which was designed to appeal to the youthful population of Leeds (over 50% are aged 16-24). It will be the first UK trial of the app developed by OPRL which will use on-pack barcodes to help people easily understand what and how to recycle, with a map to find their nearest recycling points.

Across streets, in offices, shopping centres, universities and transport hubs, over the next six months these initiatives will provide valuable insights into how we can address the lack and poor performance of on-the-go recycling.

All of the recycling collected throughout the campaign will be processed in the UK and as locally as possible. The results of the trial will also be shared openly with the goal of a national roll-out for the most successful elements.

Why do we need an on-the-go recycling campaign?

Home-based recycling rates have steadily increased over the last few years. However, recycling on-the-go figures have not – they remain abysmally low. When we’re out and about, it seems we’re far less likely to recycle, a significant problem when we collectively get through 2.5 billion coffee cups, 13 billion plastic bottles and 9 billion drinks cans each year.

A survey of visitors to Leeds City Centre in August this year found that 77% of respondents had disposed of recyclable packaging such as plastic bottles and cans, but 84% of them were thrown away in general waste bins rather than designated recycling bins.

This can be partly attributed to a lack of suitable places to recycle. Recent research by ReCoup found that only 42% of local authorities provide on-the-go recycling facilities. Evidence shows, however, that when on the move, we tend not to carry our recyclable packaging around with us, but throw it in the nearest bin we find.

Another contributor to low on-the-go recycling figures is bin contamination. Recyclable waste can easily become mixed up with food waste for example, leading to it being incinerated instead. #LeedsByExample will work to address this particular problem through an engaging communications campaign that will use adverts, street signs and humorous messaging to improve the quality of the recycling that is collected. 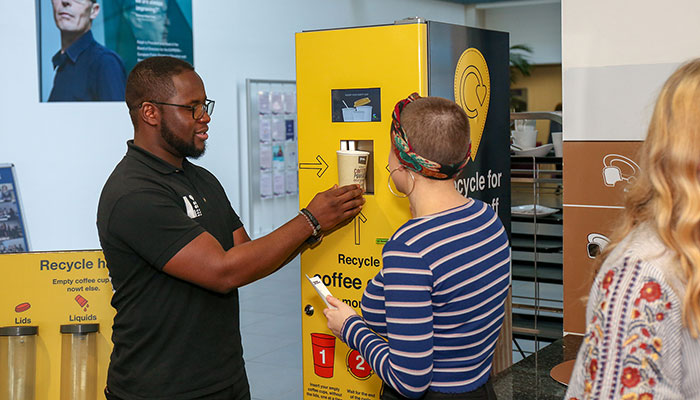 How did the #LeedsByExample campaign come about?

Recognising that on-the-go recycling needed a push in the right direction, Ecosurety worked with Hubbub to develop a landmark campaign that employed a creative approach to consumer engagement on the subject of recycling.

Support from all brands came in the form of financial backing and with high street food chains Pret a Manger, Costa, Starbucks and McDonald’s in Leeds City Centre all accepting recyclable cups and bottles.

What is the #LeedsByExample campaign asking visitors and residents do?

Where can I find out more?

For more information on the #LeedsByExample campaign, you can visit the Ecosurety #LeedsByExample page. You can also visit Leeds City Council website, or join the conversation on social media platforms.

The #LeedsByExample campaign runs from the 9 October 2018 to March 2019 and we look forward to reporting back on the findings from the campaign next summer. If you have any questions about the campaign, including how you can be involved, please contact our team.