The EU Waste Framework Directive laid out the foundation for Extended Producer Responsibility across Europe.

Whilst recycling and collection rates are widely reported, this really only represents the quantity of recycling, not the quality. Thus, if we try to examine the success of the Packaging Directive as a whole, packaging recycling rates across the EU are the only straightforward indicator.

The Circular Economy package tried to address the apparent lack of emphasis on ‘design for the environment’ with the modulation of fees depending on the eco-design of packaging, but this is not widely implemented yet.

A headache for producers

Each EU member state is required by the Packaging Directive to implement regulations into their own law to ensure recycling of packaging meets certain targets. However, each country has implemented this in a different way. Not only does this mean that producers face headaches in understanding and meeting their obligations in each country they sell in, it also means that the recycling rates achieved across Europe differ.

Here are four very different approaches to packaging legislation in the UK, Denmark, France and Sweden which demonstrate how recycling targets can be achieved through a number of means.

The UK has opted to implement a trade-able credit system which is virtually a unique approach to packaging in Europe. All members of the packaging chain (manufacturer, converter, packer/filler and seller) have to register if they handle over 50 tonnes annually. Packaging producers provide ‘evidence’ they have financed a specified amount of recycling of each material at an existing treatment facility.

The evidence of recycling occurs through the UK PRN system. The number of PRNs required by producers is calculated based on government targets, activity performed on the packaging and the weight of packaging materials handled. Each year there is a set demand for PRNs from producers whilst the supply of PRNs is dependent upon recycling plants. Therefore, PRNs act as a commodity and fluctuate in price according to economic principles. Other factors also affect the price of PRNs such as the oil price, secondary raw material prices and exchange rates.

Through this system the UK has established higher targets than the Directive stipulates (Table 2), and has met them each year.

Denmark already had a packaging waste management system in place before the Packaging Directive was introduced and by 2001 Denmark had already exceeded the recycling targets laid out in the Directive.

It is the only European country that has internalised packaging waste management: it is a government run system that is essentially tax based. In Denmark, lifecycle assessments are performed on each packaging material to determine the rate of tax to be charged to households per unit weight. Unlike most other countries, the key collection responsibility lies on local authorities/municipalities and the key financial responsibility lies on householders.

France runs a single compliance scheme, Eco-Emballages, as a not-for-profit monopoly. The producer fees finance local authority waste collection and sorting programmes to improve recycling across the country. Commercial and household packaging is differentiated in the French regulations and recycling is financed differently.

For household packaging producers, there is a unit fee per packaging element (e.g. a yoghurt pot has two elements, the plastic pot and the foil lid) and a fee for each component of packaging based on weight and material type. On the other hand, producers of packaging that goes to commercial end-users must agree with their customer who will take responsibility of the packaging waste, usually using a waste management service provider.

A notable aspect of the French packaging regulations is the implementation of modulated fees, as mentioned above, encouraged by the Circular Economy package. France has differentiated fees for how environmentally friendly the packaging is; easy-to-recycle packaging receives a ‘bonus’ fee reduction and hard-to-recycle packaging faces a ‘malus’ or increased fees.

The overall recycling rate of packaging waste in France has gradually increased over the last 10 years (from 42% in 1999 to 56% in 2009). France has also really advocated the culture of EPR in its regulations. There are more EPR schemes in France than any other EU country with 14 in total (covering e.g. tyres, graphic paper, furniture and textiles). In this way, France is further reducing the amount of solid waste that would otherwise go to landfill, be burned or incinerated for energy beyond the scope of Directive requirements.

Different again, Sweden operates a collection service, called FTI, which is owned by the five main material recyclers in the country. FTI administers fees to packaging producers by material type and weight. Like France, commercial and household packaging are financed separately. In principle, the fee payer is the company that pack/fills the product; however, ‘service packaging’ e.g. pizza boxes, plastic film, aluminium foil, plastic bags, is charged to the manufacturer/importer instead to ensure service providers aren’t hit with huge fees.

Sweden has one of the lowest levels of packaging waste generation per capita in Europe and the second highest recycling rate behind Belgium, as of 2013. Sweden is also commendable when it comes to household waste. Over 99% of the household waste generated in Sweden is recycled in one way or another.

Energy recycling (incineration to generate electricity or heat) is used widely in Sweden, and from the remaining ashes any metals or solid debris are extracted. The only waste that is landfilled, eventually, is the residual ash from incineration which has no other use – this constitutes less than 1% by weight of municipal waste. However, the heavy reliance on incineration (which is preferable to landfilling but much less beneficial for the environment than reusing or recycling) has come from a limited ability to recycle at existing facilities. Other countries with bans on landfill including Germany, Austria and Norway have the same problem.

Figure 1: Sweden has been reducing the weight of waste landfilled (black line) to achieve sub-1% 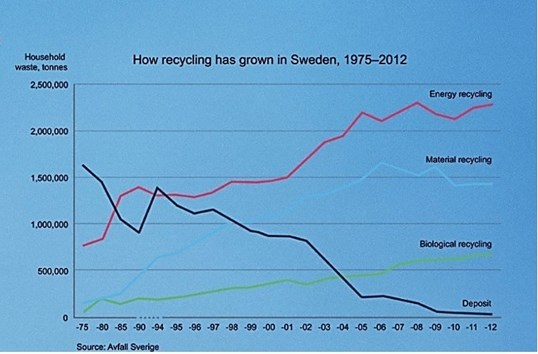 Countries have clearly approached the Directive, set and achieved material-specific packaging recycling targets in different ways through national legislation illustrating that there are multiple ways of succeeding.

The UK has achieved recycling levels above those in the Directive; but Denmark, France and Sweden have far outstripped the packaging recycling targets in the Directive. However, the success of some countries is not always entirely due to the Directive. Denmark and Sweden were ahead of the game with their own recycling systems and this legacy has enabled them to achieve the EU targets with ease. France has taken a further step and enforced additional EPR legislation of their own to ensure they recycle more solid waste than is required by the Packaging Directive alone. Arguably, recycling rates in these countries might be no higher for the existence of the Directive.

In other countries it is still an enormous struggle to reach the Directive’s packaging recycling targets. Greece was still landfilling 85% of its packaging in 2012 and it appears unlikely to meet proposed 2025 material recycling targets stipulated in the Directive. Greece has seen a steady increase in recycling since 2001 however, so the Directive appears to have stimulated progress, even though targets have not been achieved.

There are also differences in how much packaging waste different countries generate which we must take into account when evaluating the success of the Directive – for example Denmark is one of the most prolific producers of waste in Europe and Sweden one of the least. The essential requirements of packaging indicate that producers should have done everything possible to reduce environmental impact. With prevention of waste sitting at the top of the Waste Hierarchy, perhaps we should focus less on rate of recycling and more on waste produced in the first place as an indicator of design for the environment.

Contact our team of specialists now to book a free consultation on your compliance requirements outside the UK at info@ecosurety.com or call 0845 094 2228.


The DRS is set to be implemented in Scotland in 2023 with England following in 2025. All producers of in-scope drink containers will be required to meet a collection target set by government. Are you affected?


All businesses manufacturing or importing plastic packaging must keep records and notify liability when certain conditions are met.


In this live webinar on 6 February at 1.30pm, Ecosurety and environmental consultancy Resources Futures will run through the key decisions from the recent government response to the Deposit Return Scheme (DRS) for England, Wales and Northern Ireland consultation.