The Environmental Services Association has revealed details of a new campaign that will urge consumers to recycle batteries responsibly.

The early details of the national Take Charge campaign were released last week. It has been commissioned by the ESA on behalf of its members in a bid to reduce the number of serious waste fires caused by batteries that have been carelessly discarded.

Members of the ESA report that certain high-energy batteries are responsible for a significant percentage of the fires that occur in recycling sites and vehicles. The ESA’s cross-industry Battery Fires Task Group, which includes Fire & Rescue Service representatives, is working to address the issue.

Through this group, over the last three years annual data collected from ESA members shows that lithium-ion (li-ion) batteries alone are consistently responsible for around 25% of all fires at waste management facilities.

The ESA plans to seek feedback on the new awareness campaign from local authorities and other stakeholders involved in battery collections and recycling, to help further develop the communications materials, prior to an official launch of the campaign later this year.

The Take Charge campaign will feature a memorable creative concept which depicts dead batteries rising from the grave as “zombies” to terrorise recycling and waste management facilities, with consumers urged to “join the fight” against zombie batteries by recycling batteries responsibly. 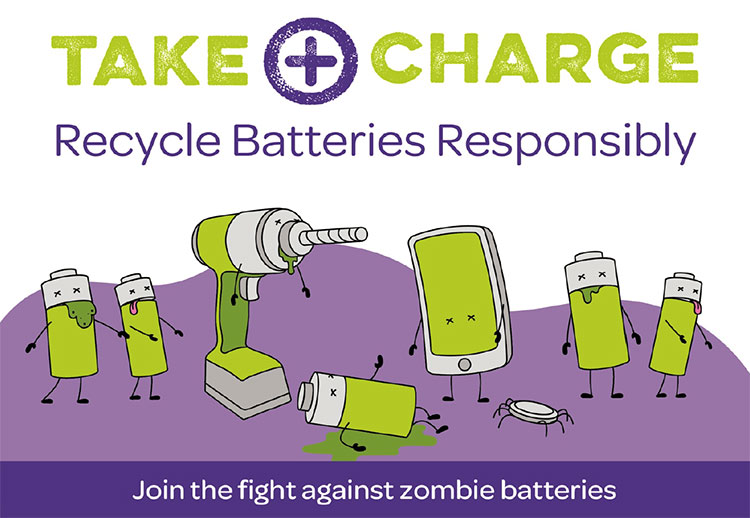 In addition to encouraging consumers to use battery recycling infrastructure, the campaign aims to raise awareness of the wide range of consumer electronic devices that contain high-energy rechargeable batteries and to help people understand how to recycle products containing batteries which cannot easily be removed for separate recycling.

Upon its launch, the campaign will include a dedicated website and its own social media presence. It will also include a short film, showing how batteries can become “zombies” if not recycled responsibly, as well as a range of communications assets for public and private sector organisations to use and share free of charge.

Fresh impetus to this important issue

Executive Director of the Environmental Services Association, Jacob Hayler, commented “Our society is seeing an exponential increase in the use of high-energy rechargeable batteries across a wide range of consumer electronic devices, so we expect the number and frequency of battery-related waste fires to increase in future unless we can encourage consumers to use proper battery recycling infrastructure more often."

"Waste fires not only cause millions of pounds of damage every year and disrupt services but, more importantly, can put lives at risk, so this is clearly a serious issue facing the recycling and waste management sector."

"We hope that the Take Charge campaign, through its memorable theme, will provide fresh impetus to this important issue and help to raise awareness among consumers of the dangers posed when batteries enter the residual waste or conventional recycling streams."

"We are working to launch this campaign later this year and, in the meantime, would very much welcome support from any organisation that shares our commitment to tackling battery-related waste fires, by ensuring that more and more batteries are recycled responsibly.”

Stephanie Housty, Marketing manager at Ecosurety commented "As a battery compliance scheme with a track record of initiating and running consumer awareness campaigns, including #BringBackHeavyMetal, boosting kerbside battery collections and an E-waste amnesty, Ecosurety will fully support the efforts of this important campaign, both in its development and promotion, where we can."

Find out more about the consumer awareness campaigns initiated or supported by Ecosurety.