Road test - the maiden voyage in our environmentally friendly BMW i3

To further cement our credentials as one of the South West’s leading sustainable businesses, ecosurety has invested in our first pool car… a BMW i3.

It was a simple decision to go for such an environmentally friendly car because approximately half our staff are customer or supplier facing. This means we’re regularly on the road (or the train) on the way to meetings and industry events. We’ve invested in the BMW i3 to dramatically reduce the environmental impact of all that travel. With a CO2 output of just 13g/km and an equivalent mpg of 471, it’s going to make a massive difference.

That’s great… but don’t you have to charge it every 100 yards for an hour just to go anywhere?

In a word, no. We’ve gone for the range extender version of the i3, which means we can go for approximately 80 miles on petrol power at any time, so if we’re nowhere near a charge point we can still get home. Charging is quick too - from a DC point we can get a further 80 miles worth of juice in only 30 minutes. Together that equates to a conservative range of 160 miles, more than enough to get to most of our meetings. Longer trips simply require a strategic stop at a service station to plug in while we have a break and check emails.

OK, but does it actually work in the real world?

Well there’s only one way to find out and that’s to use it! And last month that’s exactly what four of the team did. We left for Leeds at 4pm with a full tank and a full charge. Here is a warts-and-all report of how we got on…

With James, Alice, Olivia and myself in the car we set off with great excitement - would we make it all the way without running out of power? Would we make our meetings on time and would we get home without any drama? 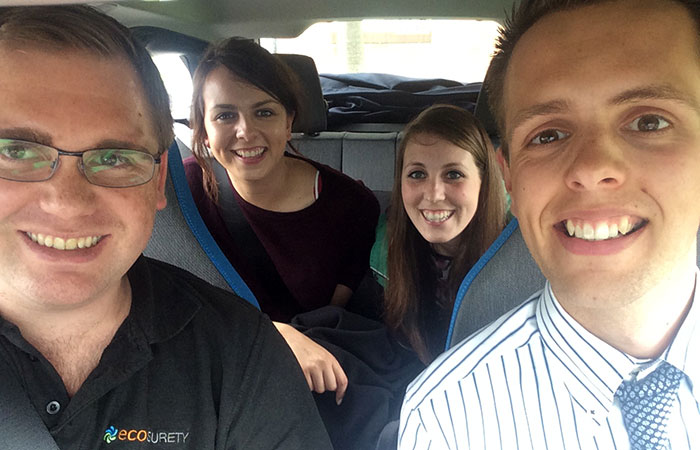 To maximise the range we went straight for Eco-Pro mode. This limits the car to 75 mph and smooths out throttle inputs. This meant we were able to get to our first stop at M42 Tamworth Services with the electric range depleted but most of the petrol remaining. All we needed to do now was charge it while we took a break. 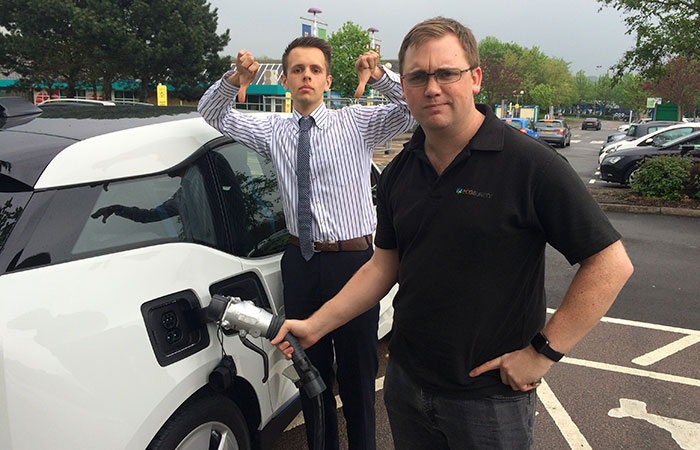 Running solely on petrol power, we got to the M1 Donnington Services where we could try charging the i3 again. The exercise itself is simple. Open the cap just like you would the petrol filler on most cars, then swipe the charge point with your card to activate and finally plug in, waiting for the green light to confirm it is working ok. To the relief of the team this time it worked, and it was very satisfying to see the battery charge increasing as the minutes ticked by!

Half an hour later we were back on the road, the combined range reading five miles more than we needed to get to our hotel which we knew had a charge point. This was the stint I drove and I have to say I really enjoyed it. You sit high, the car is very refined, very quiet and before I knew it the journey was over. 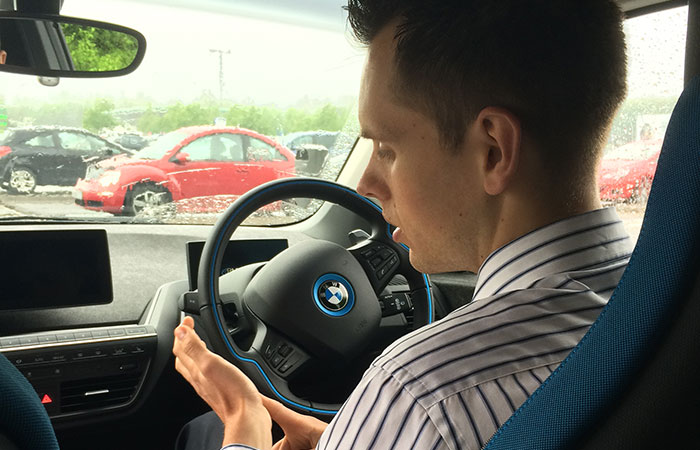 We rolled into the hotel with only two miles to spare and found the charge point - phew! We checked in, asked about the point but were told we needed our own card to access it. Needless to say we didn’t have one. Another learn then – each charge point provider has their own access cards which are sent to you once you have paid to subscribe. Our ‘Source’ card works on most points but not all! 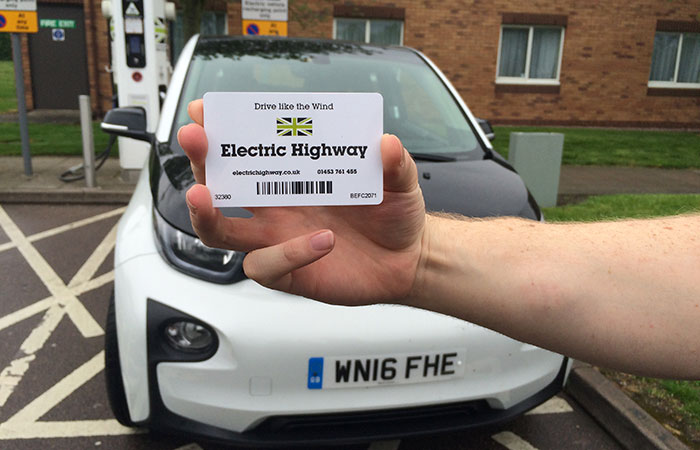 A quick check on an app and the nearest point we could use turned out to be at an Ikea 10 miles back in the direction we came from. So via a nearby petrol station, off to Ikea we went! I don’t usually go shopping with my boss for homewares at 7pm on a weekday, but needs must... 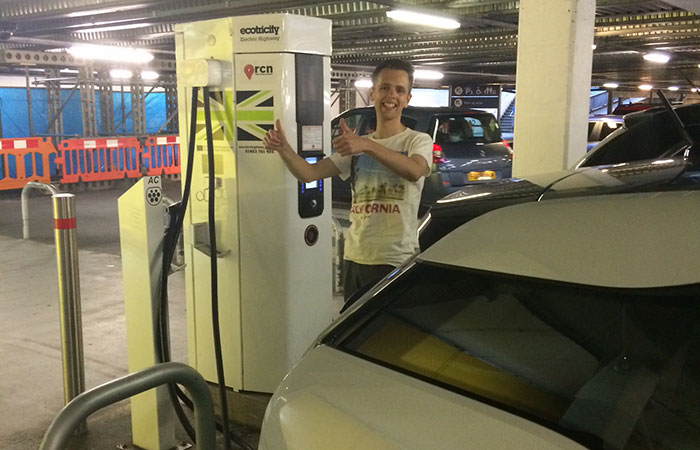 After a lap of the Ikea store we were fully charged and topped up with petrol, not to mention a few kitchen utensils too! A late dinner followed and it was up early the following day for our meetings.

Our commercial director James was custodian of the i3 for most of this day. He took the car from our Bradford hotel to a meeting nearby and then onto Liverpool for his second meeting of the day. 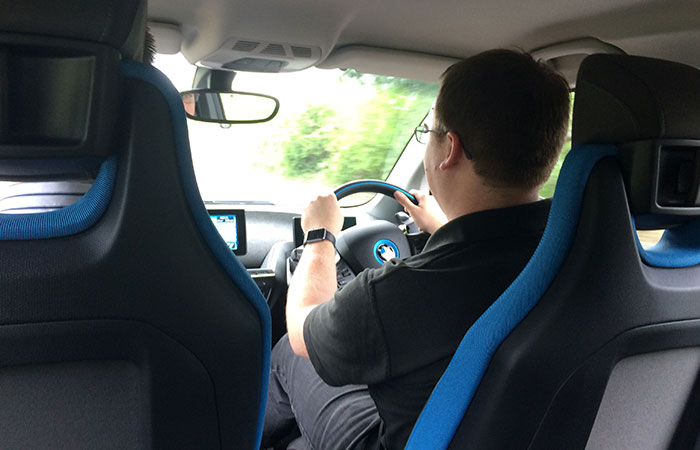 Looking through the ecotricity charge-points available James headed to a charge point in central Liverpool, however 40% into the charge the i3 suddenly stopped taking electricity. He then tried the next charging point along but the car wouldn’t take charge from this one either.

Was something wrong with the car? Or the charge point? Either way – we didn't have the time to find out, with lots of work to do we had to leave to get back to Bristol! A drive from Liverpool to Manchester followed to pick up my good self and then we were on the road back to the South West. With the 40% charge we had, we only needed to stop for petrol twice to fill the 10 litre tank and we were back home, safe and sound and on time!

Well, the trip wasn’t without it’s difficulties. We managed to find charge points that didn’t support our car, charge points that stopped working and charge points that we couldn’t use with our card. So it’s clear that forward planning is required to ensure you get to your chosen destination; especially when it’s hundreds of miles away. To help with finding places to charge we found the following websites were the best - ecotricity and zap-map.

Our overall conclusion was that despite the charging frustrations the car is still a definite success. We were able to get from Bristol to Leeds for £10 on the way up and £15 on the way back. When you compare that to taking individual cars at 45p per mile the saving is massive – both on the wallet and for the environment – so a double win. In fact we calculated taking the i3 saved over £700 for the one journey, which is more than the monthly lease.

It was very pleasing to turn up to our meetings knowing that we had arrived in our environmentally friendly car too, it was certainly a positive talking point at each of our appointments. Does your organisation use an electric car too? Please share your experiences below - good and bad!


The Competition and Markets Authority (CMA) have released a ‘Green Claims Code’, to help businesses comply with consumer law


The European Recycling Industries’ Confederation (EuRIC) has published guidance on best practice for those sorting and collecting textile waste, in order to maximise recycling and re-use.