Sustainable travel – a luxury for the wealthy?

A recent business trip to London got us thinking about the sustainable travel conundrum - do you really have to pay a premium to ensure business travel has as little impact on the environment as possible?

I travelled with three colleagues to London and between us we were attending two different conferences. Unfortunately, our company electric car was already booked out that day, so being a sustainably minded business we decided to travel by train.

But I was left asking myself why taking the train was so ridiculously expensive with four return tickets costing over £550! So, I thought I’d look a little further into the cost of trains relative to other – less sustainable – transport.

Ultimately I wanted to know what modes of transport have the lowest impact on the environment and your wallet - is there a happy compromise? Let's start by looking at the costs. 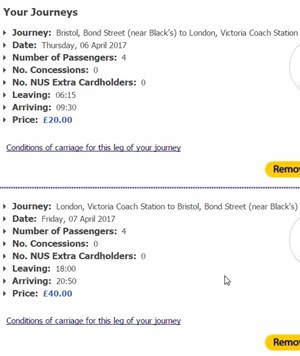 While taking the coach isn’t time-friendly, it is pretty sustainable. Looking up a coach journey (for the same day of the week on which we travelled to the conference), it is so much cheaper than the train!

You can see here, the charge would be £20 for the outbound journey and £40 for the return. That is not per person – that is in total for four passengers; four coach passengers cost less than one traveller on the train! 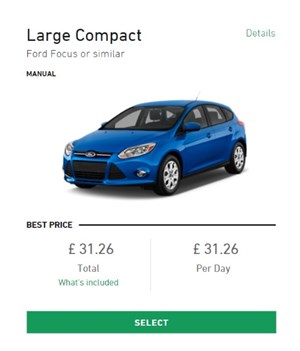 If we assume that it costs 50p per mile to drive our own car, it would have cost £118 for the four of us to drive together on the 236 mile round trip. If we throw in £15 parking for the day in London we are still far below our train expenditure. But why stop there? All four of us could have driven our own cars and parked for less than £550 - an unsustainable nightmare.

We could have hired a car for the day, which is likely to be more sustainable than driving our own vehicles as hire cars are brand new and usually have the lowest emissions technology. For just £31.26 per day plus fuel (at a max of 20p/mile = 236 x 20p = £47.20) and parking, we could have hired a car – or even four! – for less than the cost of our pricey train tickets. 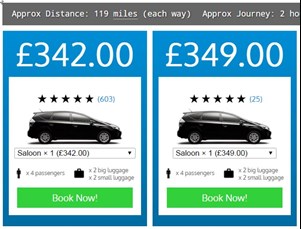 Let’s take it a step further, why drive, when we could have someone else drive us! I looked into the cost of a return journey via taxi.

I found an online quote for £342.00 return – a bargain relative to the train… but not a bargain for the environment. At least, however, the train was cheaper than four return taxi journeys!

So, what is even worse for the environment? Flying - that is much worse. But how would a flight affect the purse strings? As it turns out, you can’t fly from Bristol to London. But you can fly from Cardiff. A quick online search finds a return ticket from Cardiff to London City airport for a mere £70.

Four return flights would set us back less than half of four return train tickets. The take-off times are not bad either! We would just have to get to Cardiff, which is 49 miles from our office. 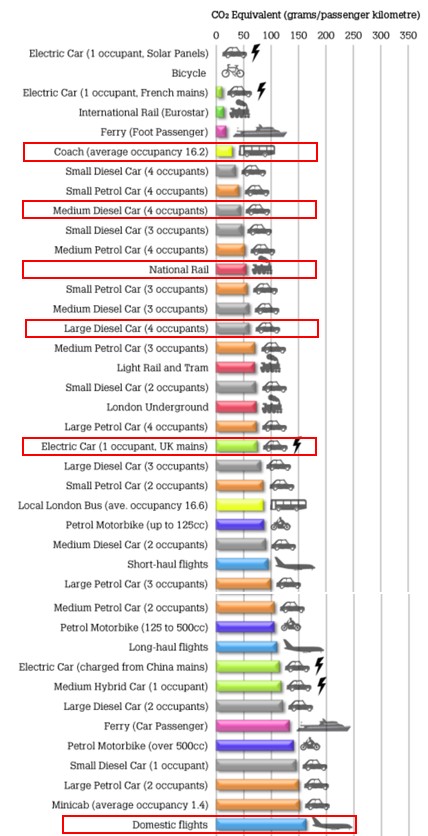 Having looked into the costs, let's consider the environmental impact of each mode of transport. The big problem with calculating your footprint online is that each website varies quite substantially in their results.

Here I have used Beagley Brown because it was the most detailed breakdown I could find that includes all the different transport options with their corresponding greenhouse gas (equivalent) emissions based on DEFRA’s 2011 data.

The results are very interesting. As expected, a domestic flight is very damaging to the environment. The electric car features quite highly as well – but this is for one passenger so we could allocate ¼ of the CO2 equivalent to each passenger which makes the impact much lower.

Travelling by national rail emits slightly more CO2 equivalent per person than a medium diesel car (with 4 occupants) and slightly less than a large diesel car. The clear winner from an environmental point of view, however, is the coach.

I had always thought of trains being more sustainable than coaches – however this figure refutes that. The coach is the most environmental and the most cost effective mode of travel; however you will have to spare the additional hour or two as the journey is much longer.

Despite the coach’s good value, the general trend is that the less eco-friendly modes of travel are cheaper than the more environmentally harmful options.

So I suppose what I am asking is why? Why is it so expensive to travel sustainably?

The conference I attended in London that day was called Sustainability in Turbulent Times. One of the key discussions was around the market of sustainability – how we are failing to encourage sustainable practices, how subsidies are still often set up to favour a fossil fuel based economy, and how we see eco-friendly as a costly luxury which involves compromise and trade-offs, when we should see it as a route to gaining things, not giving them up!


I remember a time when anything prefixed with the word ‘second-hand’ was considered low class.