The UK exceeds its 2018 battery collection target of 45%

The Environment Agency has released figures confirming that the recycling industry achieved a battery collection rate of 45.23% in 2018 - but does it deserve applause?

The headline certainly makes for easy reading if judged by its own merit. The primary message here is that the collective parties involved, namely producers, compliance schemes, government agencies and recyclers, have met the collections target and ensured compliance for the year.

Since compliance is the goal, you’d be forgiven for thinking that this news was worthy of a round of applause and a lot of back-patting. One could point to these results as the first time the UK has ever met the 45% target; however, I believe the broader picture is one less harmonious.

My previous article on the 2017 battery collection figures published last year, considered the disappointment of the UK failing its 2017 target, concluding that it was due to the gap in the reporting structure - a technicality. The 0.12% deficit missed last year has been patched up and, now that the proverbial cracks have been plastered over, it’s easier to see that the wall being decorated is actually part of a dilapidated building long due for renovation.

Addressing the imbalance of collections

The UK has consistently placed around 38,000 tonnes of batteries onto the UK market each year for the past five years, the equivalent weight of more than 3,000 Routemaster London buses. Ten years ago, when it was decided how the EU (and UK) would report these batteries, it was split into three chemistries: Lead Acid, Nickel Cadmium and ‘Other’ (acting as a catch all). 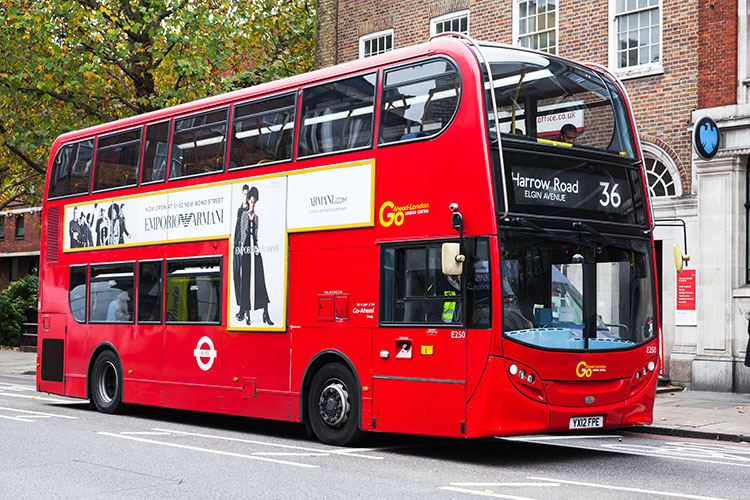 Batteries placed on the market in 2018 were the equivalent in weight to 3,003 Routemaster buses

It’s worth pausing a moment to think about the everyday portable batteries you encounter in your lives used in phones, TV remotes, car keys, headphones, watches, laptops or toothbrushes. These devices are all given life by batteries reported in the ‘other' category and make up 96% of the 38,000 tonnes of batteries reported as being placed on the market.

For the UK to hit its target in 2018, it had to collect 17,811 tonnes. If the collection figures were to reflect the annual average of batteries placed on the market over the last three years, we would expect to find over 90% of collected batteries to be in the category of 'other', with the rest shared between lead acid and nickel cadmium. 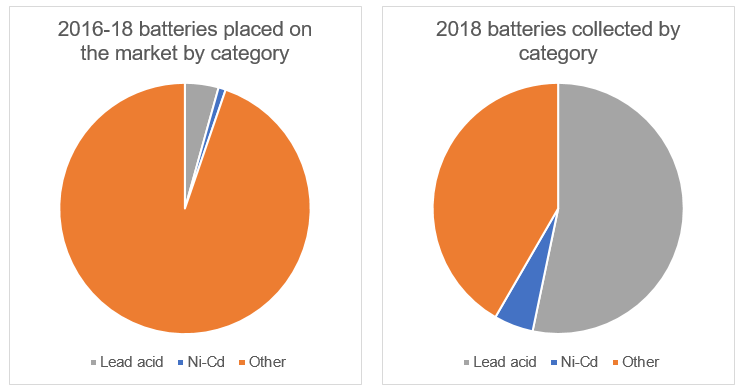 Instead we find that the 'other' category only accounts for less than half the amount, making up 41.6% of all batteries collected, with lead acid achieving 53.2%. It appears that the collection rate for the vast majority of batteries that we all use everyday is under performing.

What’s next for the industry?

The picture is not quite so clear however, as the industry is aware of a number of factors that are contributing to the imbalance of batteries placed on market and those collected. Firstly there is known under-reporting of portable sealed lead-acid batteries placed on the market, which skews the data.

It is also likely that there are many portable batteries exported in working, second-hand devices. These batteries effectively escape the UK collection network, despite having been recorded as being placed on the market. In line with the WEEE regulations, the UK regime could investigate and include tonnages of these batteries via substantiated estimates into the collection performance figures.

Lastly could a compliance fee mechanism be required to help meet future targets for portable batteries? Again, a similar system operates in the world of WEEE. The funds generated could help to directly fund consumer awareness campaigns or collection and recycling infrastructure projects.

There are many avenues to investigate and Ecosurety is actively working with stakeholders to explore possible solutions to an imperfect system.

New figures also recently released for Q1 collections in 2019 reveal by far the best start to a year since EA records began in 2014, as illustrated in the graph below - however lead acid continues to make up over half of this amount.

Robbie Staniforth, head of policy at Ecosurety, commented “Collections of portable other batteries are the highest ever for a first quarter in the year. While we hope this continues, the reality is that disparity between how producers and recyclers report continues to muddy the water. We have made recommendations to government for how this could be addressed in future to turbo-charge the collection of mixed household batteries.

“There is widespread container provision across the UK but the information provided to the average citizen is still patchy. Similar to packaging and WEEE, we believe a co-ordinated industry-wide approach is required to harmonise communications.”

Later this year Ecosurety will again be running the annual #BringBackHeavyMetal campaign to promote the collection of used portable batteries by consumers and continues to expand our battery collection network. Please click here to find out how your workplace or stores can help to collect batteries too. 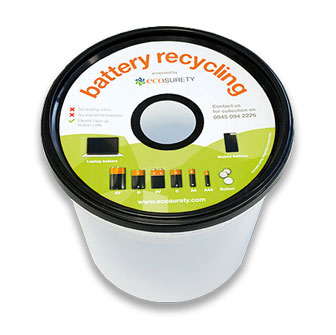