Good news for EEE producers supplying outside of the UK.

The Environment Agency has recently announced that they will allow the netting off of exported EEE in data returns with immediate effect.

ecosurety has been involved in the working group which has been advising policy makers of the distortion in the WEEE market resulting from the previous inability to net of exported EEE from data returns. It is important that Producer’s obligations are factored on the amount of EEE that actually ends up in the UK waste stream and also reduce the potential for duplication of obligation for Producers operating at European level.

For example, where a Producer normally reported EEE in their quarterly or annual return, they now are able to deduct the weights of EEE that was exported during the same reporting year (i.e. deductions cannot be made for exports of EEE that we reported in previous compliance year). 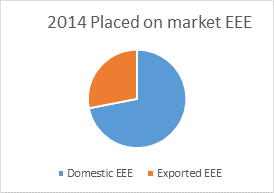 It will be an important exercise as we approach the quarter 4 submission for Producers to review whether they are able to net of any EEE figures. This will apply for all four quarters data and could significantly reduce future obligations into 2015.

As the netting off can be applied to the whole of 2014, we are now accepting resubmissions of member quarterly data returns, until 15th Jan 2015. After 15th Jan datasets for the 2014 compliance period cannot be modified. The clear benefit will be for members who have a large proportion of B2C EEE that they are exporting within the year, which affects the 2015 recycling obligation and recycling costs.


Packaging producers will be expected by law to collect packaging EPR data from March 2023.


The Department for Environment, Food & Rural Affairs (Defra) has announced that it will now consult on improvements to batteries regulations in 2023.