The Environment Agency has recently released WEEE collection data for the first quarter of 2016.

The UK Environmental Regulatory Team of DEFRA (formerly BIS) previously set the 2016 UK WEEE collection target at 544,341 tonnes across all WEEE categories. The newly released collection data illustrates that in order to remain on track, the UK is now required to treat just over 136,085 tonnes each quarter. 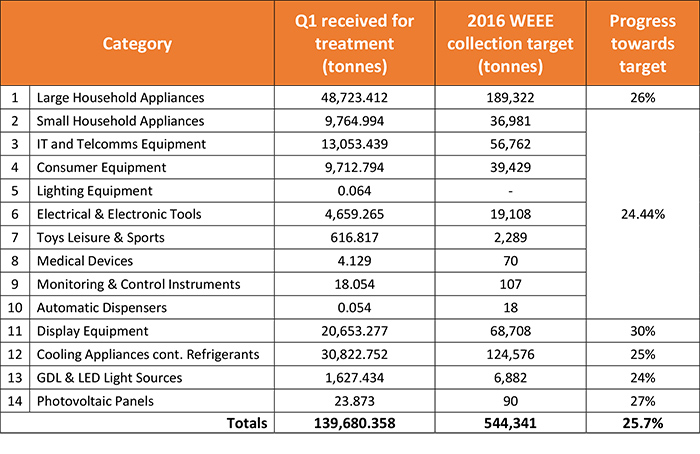 With over 139,680 tonnes of WEEE treated during quarter one this year, the UK will meet the overall collection target if this trend continues. The data is showing a balance of treatment across all WEEE categories, which is indicating there is no apparent shortfall in any particular area.

The data report from the Environment Agency also includes preliminary figures for the amount of EEE that producers reported in their quarter one return.

Following the cuts to renewables subsidies towards the end of last year, reporting in category 14 (photovoltaic panels) has seen a 45% decrease compared to the same period last year. This is interesting, given that targets for category 14 have increased from 36 tonnes in 2015 to 90 tonnes in 2016. If we’re seeing a trend of fewer producers reporting PV and increasing targets, given that treatment costs associated with PV are high, these remaining producers are set to foot a big bill!

The remaining categories show a general increase in the total EEE placed on the market than in the same period last year.

Producers were in an interesting positon during quarter one last year when they were having to reconsider their B2C reporting in line with the revised interpretation on dual use. As we moved through the year, we saw a gradual shift in reporting over to B2C. Now in 2016 producers are able to hit the ground running with the dual use interpretation, which could explain this overall increase in B2C reporting.

To discuss your WEEE compliance obligations please contact our team of specialists on 0845 094 2228 or email info@ecosurety.com.